Welcome to the website solely focused on the 2005 Jeep Wrangler.  This model year was part of the 10 year (1997 – 2006) generational body style and design set for the Wrangler known as the TJ.  Additionally the 2005 model year is part of the three year run (2004, 2005, 2006) of the rare TJ Wrangler Unlimited known unofficially as the LJ.  You will find that this website is online for two unique purposes listed below.

Feel free to browse through this site or continue reading below for a brief background on the Jeep Wrangler.  Please Contact Us with any questions you may have.  Thank you for visiting 2005JeepWrangler.com!

Brief History of the Jeep Wrangler

The Jeep Wrangler classification officially started in 1986 with the YJ when Chrysler purchased the Jeep brand.  The Wrangler however, has its roots with the Willys civilian vehicles post World War II.  Both Willys-Overland and Kaiser-Jeep produced a variety of Willys Jeeps including the MA, MB, Wagon, Jeepster, Pickup and M38.  These vehicles gave way to the highly commercially popular CJ5 and CJ7 models that were produced throughout the 50s, 60s, 70s and early 80s.

The Wrangler YJ which was produced from 1986 to 1996 was a departure design wise from these early models featuring more traditional square headlights and SUV styling amenities.  In addition technical features were updated including more powerful engine options, a roll cage and more reliable suspension components.  Over half a million units were produced and sold with many still in operation today.

The TJ Wrangler revisited the traditional Jeep style, namely the round CJ headlamps, but maintained the YJ size increases and made some major technical and performance improvements.  This included a major suspension overhaul including a coil-spring suspension for better off-road performance and handling.  Other enhancements included beefier suspension components such as skid plates and heavier duty axles along with general drivetrain improvements in both engine and transmission performance. 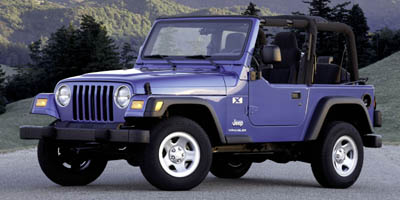 Chrysler also offered many special edition trim packages of the Wrangler during the TJ generation.  On top of the standard SE, X, Sport, Sahara and Rubicon packages the following editions were also available for select years.

One of the more rare Jeep Wrangler models is the TJ unlimited known as the LJ.  Coming standard with a 10 inch longer wheelbase, 3.73 gear ratio Dana 44 rear axle and Command-Trac 231 transfer case; the LJ was only produced from 2004 to 2006 before the entire Jeep Wrangler was redesigned to the JK generation.  On top of the added space of a longer wheelbase for both the rear passengers and rear trunk area, the LJ Wranglers have nearly double the towing capacity.